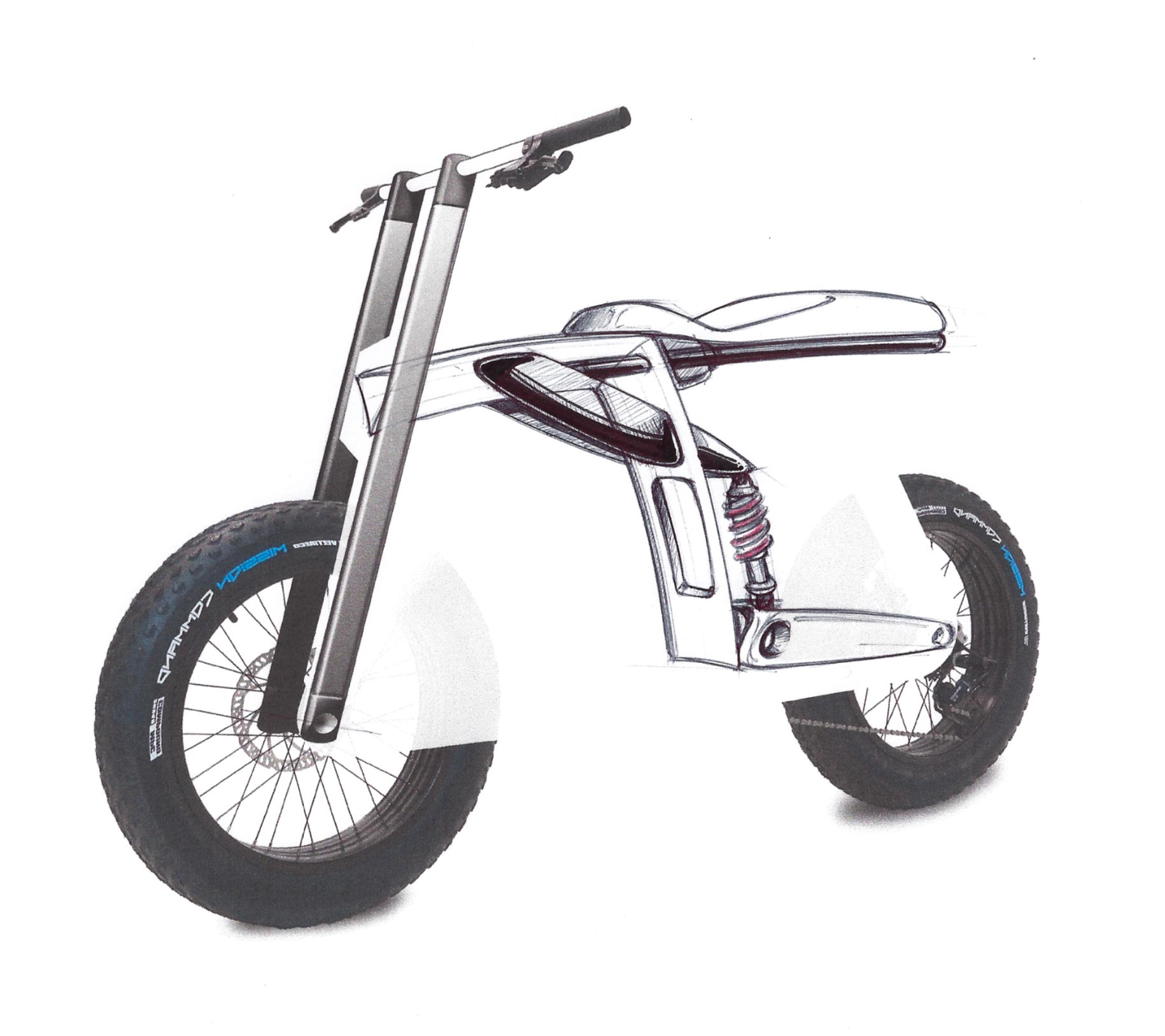 The Cafe Racer’s history started in the mountains when Frank, Aevon’s CEO, went meditating among llamas in Peru.

We could have carried on with this story but we thought you wouldn’t believe us. So we decided to tell you another version.

Le Cafe Racer is born from a desire, a fantasy : we wanted to design and conceive a hell of a bike, a bike that you crave, a perfect bike, THE bike. With a real attraction to the motorsport universe but also to all mechanical and aesthetical themes deriving from it, Frank had the ambition to create a jewel mixing all of these elements. Add to this his passion for customization to improve the characteristics of a bike whatever the number of its wheels : Le Cafe Racer is the ideal machine, an incredible source of inspiration.

That’s when the adventure starts : the first idea was to conceive a strong beam frame in which we could put the battery. The concept was nice, easy to build but it left a bitter taste of “It’s good but something is missing”. Frank decided to call a designer : Antoine. Quickly, many freehand versions appeared. At the beginning, we admit it was far from perfect. But with time we refined the frame and decided to externalize the battery to make it easy to set up and maintain.

We drew a simple and efficient Cafe Racer, a little like a standard motorbike : good-looking, sensible, conventional. You can imagine that this result was far from satisfying for us. We wanted a bike people can’t keep from staring at.

Because alone we go faster but together we go further (not bad right ?), relatives became part of the adventure. Family and colleagues gave lots of ideas, good and bad ones, that all helped to build the project and correct some imperfections. 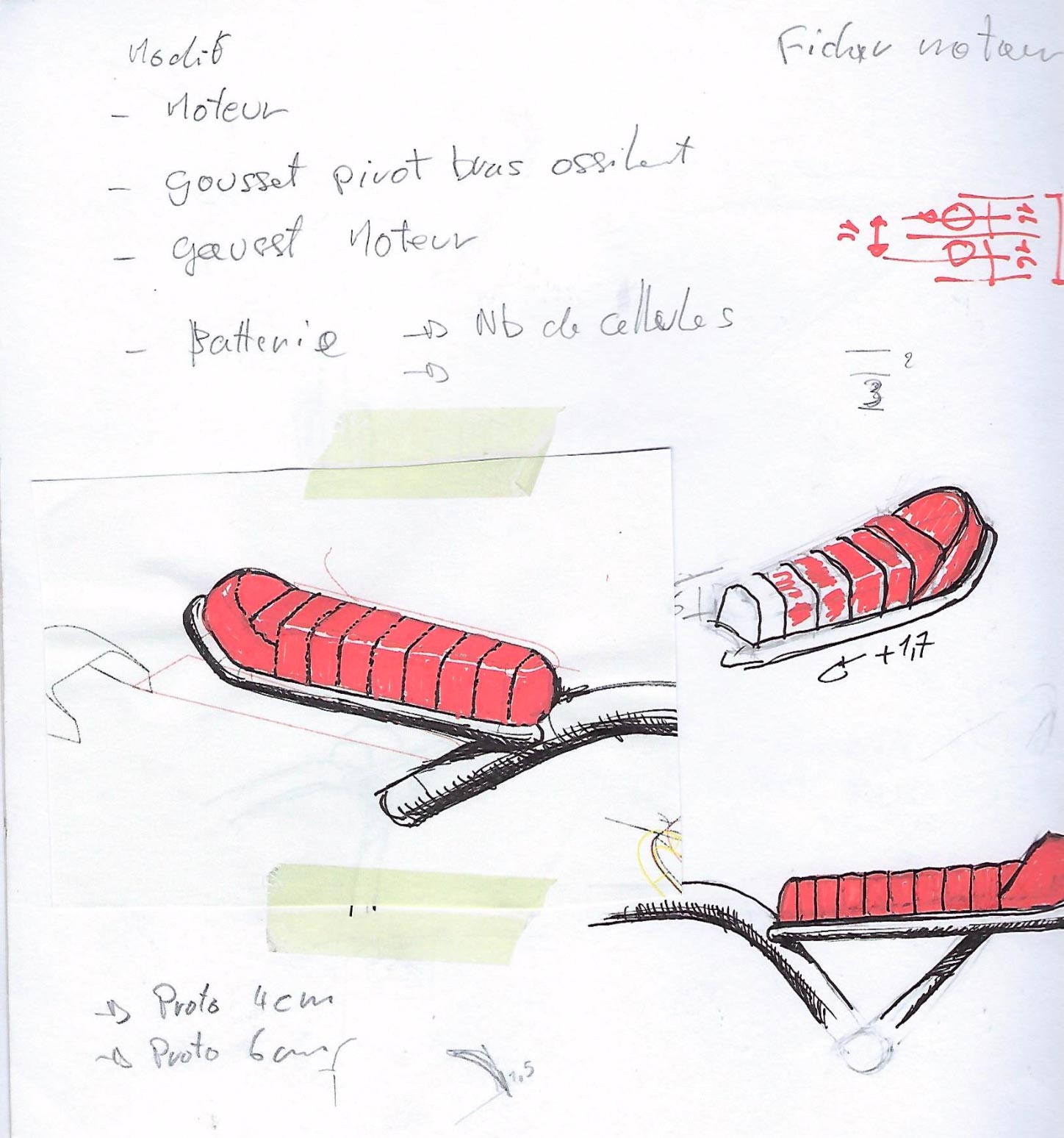 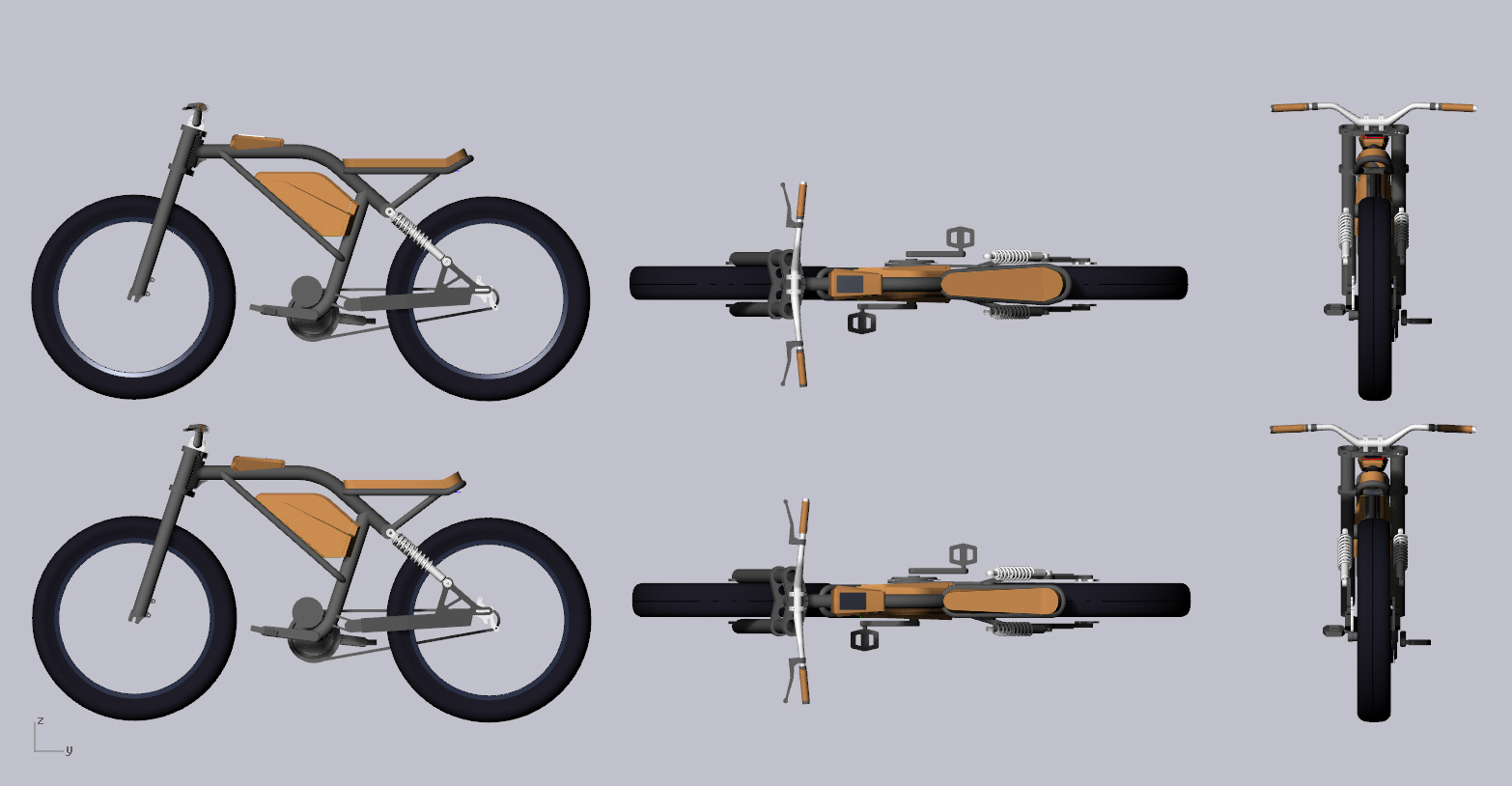 The first prototype of the bike 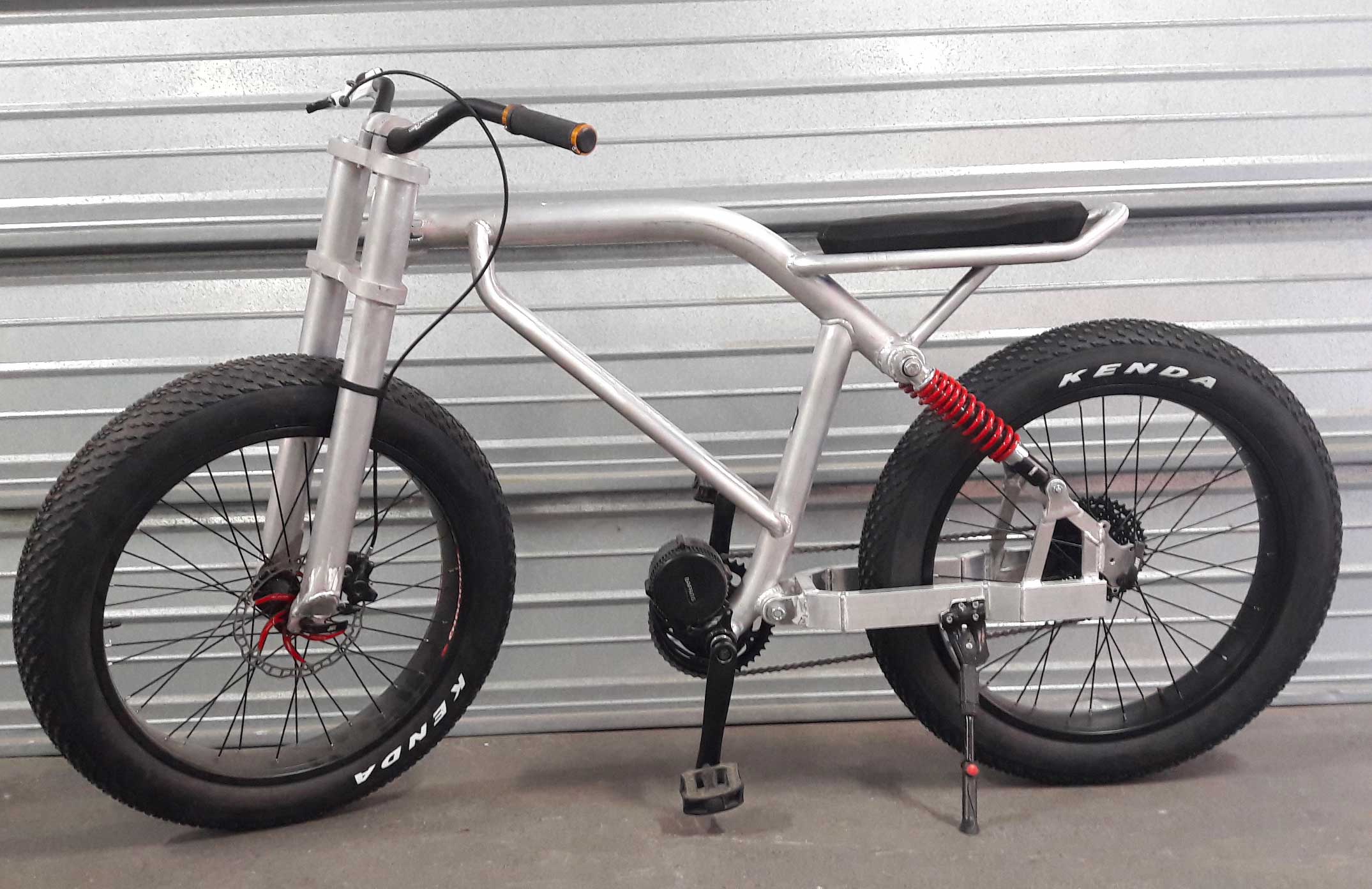 After 4 months of brainstorming, new designs and creative moments around beers, the drawings were handed over to Eric, our engineer. His job was to transcribe the sketches into 3D plans and make simulations of mechanical performance. We were very proud when our baby passed this test with success.
In the end, we had the consent from our engineer. We were thrilled about the project so naturally we said : ‘Let’s build this bike !’
Nobody on the team knew how to weld aluminium so we had to hire someone to do the job. That’s when Philippe, our designer and welder, made his entrance. From the start Philippe liked the bike and had lots of ideas. He made some aesthetical suggestions that considerably improved the final design. The bike then went back into the hands of Eric, our engineer, who transcribed the 2D design in 3D drawings… but we already told you that, right?

After several trips back and forth, we were finally ready (for real)!

Le Cafe Racer being the ultimate bike, we needed the best material. And to get quality aluminium we went directly at the root : to Giant‘s factory in Shanghai. We met local engineers with our bike sketches and they totally adhered to the project.

Everything went very fast after that. A month later we got a delivery of aerospace quality 6061 T6 aluminium tubes. Then we set up a little welding workshop with all the material necessary to build the prototype : a 500kg steel plate, cutting, drilling, and bending machines, an aluminium TIG welder…

Philippe, our designer and welder, Is also an expert in steel work (he is an expert in of things our Philippe) : he bent,  cut,  welded and built some pieces and struts from aluminium pieces to finish the adjustments.

After 2 months of hard work, alterations, mistakes and plan adjustments, our first prototype came into being. We added 2 wheels, handlebars and pedals… We had OUR bike !

Before launching ourselves into the creation of a bike, we are the designers and manufacturers of light bike trailers : the Aevon brand. They are famous worldwide for their efficiency, reliability and strength. They are amongst the most expensive on the market. But if you intend to leave for a world tour, the Aevon trailer is your best option.
Just like you may revisit a recipe, we used the same ingredients as the trailers to create a bike. We used the same tubes as the beam and the frame of our trailers. Our secret is revealed : le Cafe Racer is a bike trailer assembled a different way !
More seriously, the starting idea was to pool resources for the whole production. We can produce more efficently with a minimum of references to deal with, it’s easier and we can be sure of the quality of the products.
When we see the final bike, it’s hard to imagine the stresses in terms of compromising but also in terms of design. We had to resist the appeal of easy options which attracted us to simpler tubes that are easier to work with.

Why? Because many other bikes use the same frame and change only the motorcycle accessories. The design of the Cafe Racer is unique.

Not only is it unique, it’s also E-ready. Everything is planned to make it easy to set up a motor and battery. There are hatches in the frame and threaded inserts to fix the cables. Because of the geometry of the frame, it accepts any type of motor (middle or wheel motor) and all powers (250w or 1000w). We won’t lie : Le Cafe Racer is meant to be electric, ideally with a fast and powerful motor.

What’s more, the frame can be entirely customized. The paint, the fork accessories, the swing arm, the pedals, the saddle, the shock absorbers, the electric system, the battery… In short, it’s completely possible to make this bike your own!

Le Cafe Racer can be accessorized : you can add a surfboard holder, a motorbike headlight with blinkers, a hitch to attach a bike trailer, an extra battery holder but most of all something essential : a beer pack holder + a whisky bottle with a glass. This list can be completed..

When can we set up a meeting ?

Le Cafe Racer has a future that is all planned out : an approved ‘speed bike’ version (with helmet + insurance), a standard 250w Ebike version and a non-certified ‘speed bike’ version which is going to be the purest version of Le Cafe Racer.
We plan to make a shorter frame for women so you can enjoy a trip with your girl.
A kid version? Why not, that could be cool! Even a version without pedals for little ones.
This project is an amazing source of ideas : a scooter version is also on our minds but we won’t say more about it yet.

This bike is also a way for us to communicate, to show what we love, to bring together
what we like, to develop a community with whom we could share our improvement ideas.

Our wish is to meet our community so we can discuss our shared passion
and why not make ‘custom battles’ with an (almost) official jury!