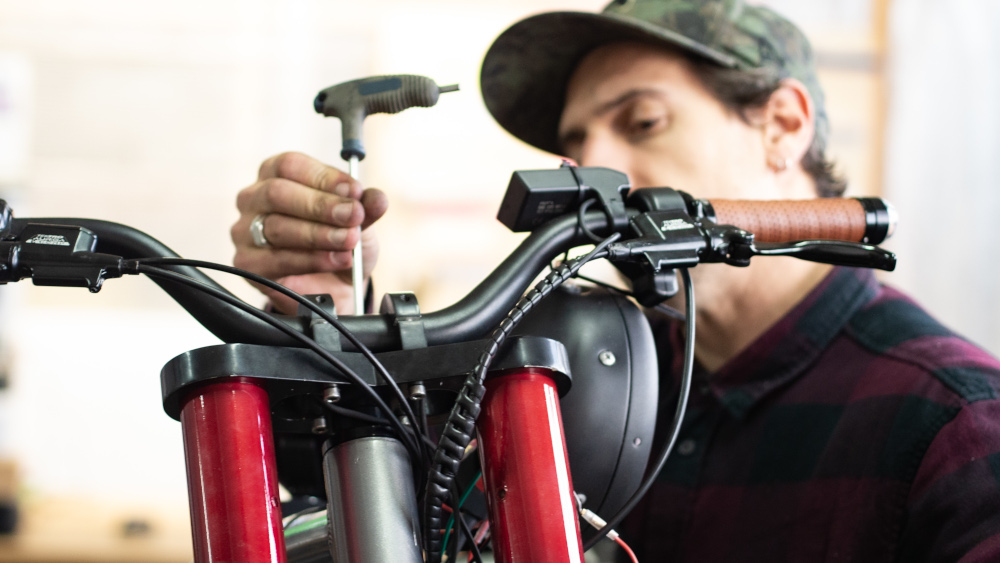 Le Cafe Racer will be a bike that you can customize and personalize. You will be able to transform it completely according to your wishes and even launch your own trend.

Nowadays, the custom phenomenon is more and more standard in all fields: vehicles of course, but also clothes, consumer goods or decoration. Today the consumer is looking for made-to-measure products, contrary to the standardization model that was the norm a few years ago. We don’t like standard stuff anymore, we prefer a unique object, something that we won’t see anywhere else. The custom universe is particularly famous in the world of the motorbikes. It means you customize your motorbike yourself, at home, ask some motorbike finisher to do it, or even buy some personalization kits directly offered by the manufacturers and composed of various accessories such as the handlebar, the saddle, etc… The custom principle is to improve the aesthetics of the motorbike changing its paint, the chromes, the motorization or the accessories. Some of the biggest manufacturers decided to specialize in the building of serial custom motorbikes. 95% of Harley Davidson’s motorbikes are customized and personalized before the purchase.

This custom phenomenon was born in the 50s in the United States and spread out through road movies in cinemas and the American TV with movie stars such as Marlon Brando, James Dean, Steve McQueen… That’s also when the trend of the choppers and the café racers appeared. Le Cafe Racer will be available in its classical version as well as special versions.

If you choose the classical version of the bike, you will be able to change the accessories yourself, with a personalization kit we’re currently working on.

The ‘scrambler‘ kit will include:

In special editions of the bike, you’ll find an old school version, the one that looks the most like a café racer, with accessories such as:

In special versions, you will also be able to find the ‘bad ass’ version:-).

Our team is actively working on the research of accessories that might fit all the editions we have imagined. If you need one accessory, such as the bottle-holder, of course you can buy only this item.

The goal of Aevon Bikes‘ team is that everyone can personalize his bike from the handlebar to the saddle, that everyone owns his very own café racer, the one that he imagined. We would like to create a world around the bike Le Cafe Racer with other custom enthusiasts eager to give free rein to their imagination and creativity.

Everyone will be able to share his ideas and the changes he made on his bike to inspire the rest of the community.

By the way, if you already have a few ideas, don’t hesitate to share them with us on our social media.