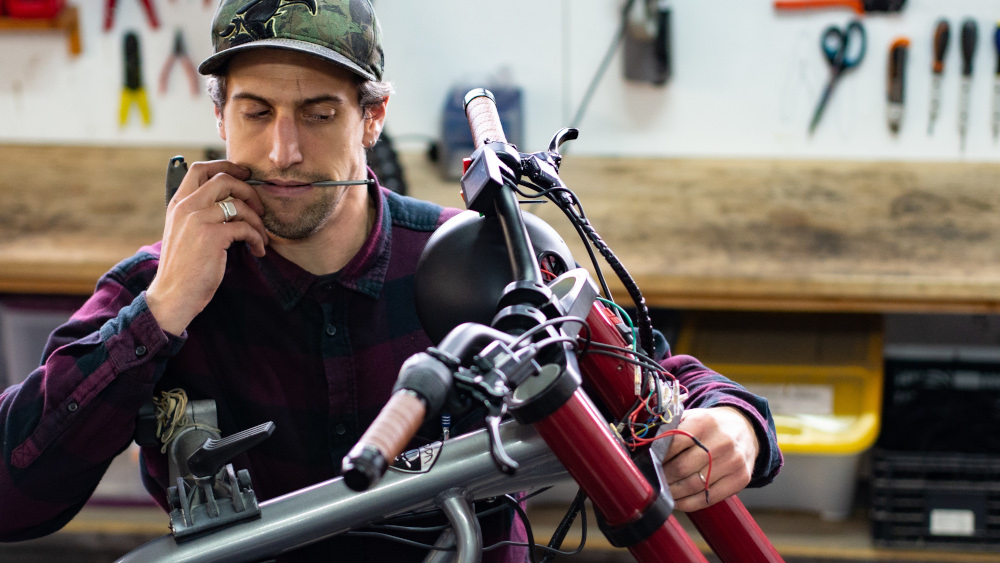 In the Aevon Bikes team, you can find a crazy designer and a talented creator, but also a hipster, a guy with a moustache, a driver and photoshoot models !

To start with, let me introduce our workshop supervisor and also model for our photoshoots : Clément. Very deft with his hands, in his free time he recycles derelict parts from bikes to transform them into lamps or decorative objects, a real environment friendly process. He was asked to entirely decorate a pub in the center of Bordeaux. He drives an electric bike equipped with a Bafang 750w middle motor since he joined our team this year. His daily trip has become much more pleasant especially the part where he has to climb the famous Pont d’Aquitaine which is quite steep. Whether it rains or it snows, he comes to work by bike to avoid getting stuck in traffic. And when it rains, you can’t miss him, wearing his bright yellow oilskin and his swimming trunks ;-).

The rest of the time, he likes to ride his motorbike.

As a real handyman and artist, he has many ideas for the future of our bike.

Nathan is our salesman and our second photoshoot model. You may have seen him a few times on the pictures we shared on Aevon Bikes social media. Fan of surfing and tatoos, he likes to chill around a fresh beer with friends and has a lot of imagination to develop the bike’s accessories : the surf-rack of course and why not, later… a moustache to put above the front light…

He likes motorbikes, especially vintage models with a real universe. Le Cafe Racer totally fits into the ‘old school’ world he particularly likes. He can even imagine a future Scrambler version of our bike and maybe even a chopper version, these American motorbikes with a unique design.

His cool biker side is often why his colleague, Clément, teases him. But don’t worry, he doesn’t let himself be pushed around.

If you came to see us at the Eurobike in Germany this year, you may have shared a coffee with him, maybe with a tiny drop of whisky (it was quite cold).

Frank is the team’s guru, in other words : the ‘big boss’. Le Cafe Racer was born out of his mind after months of thinking, drawing and getting inspiration out of Pinterest. His passion is bikes of course, but also car racing and old cars. He likes to take design ideas from racing and try to use them in the concept of our bike.

Even if he is hard-working and professionnal most of the time, the idea to be able to carry a beer pack on Le Cafe Racer is his idea :-). He also has in mind the project to build a bike/bar.

During his free time, he likes to go up in the air ! Relentless paraglider, he has more than 1000h flight at his credit and could tell you the story when he stayed sitting on a rock in the middle of the sea for hours after a slightly missed landing.

He comes to work by bike every day with a recumbent electric bike he entirely built from a foldable bike. A crazy work of art that enables him to ride for 52km every day…

At his side, Philippe, our designer and welder. A complete artist, Frank says he’s able to work metal by telepathy.

He also had to spend a lot of time finding compromises between what we wanted to do and what was possible, which was not always an easy task.

Also a cyclist, Philippe comes to work every day by bike and without a motor.

Marieke, sales and marketing assistant but also in charge of the purchases, including all the spare parts and future options that will compose the final bike. Coming from a flat North country : Holland, she likes to ride a bike, preferably when it doesn’t rain, preferably with a motor and on a bike that keeps your back straight, with a large handlebar.

Her idea for the next photoshoot : to make pics of Le Cafe Racer directly at a tattoo’s shop. And we have found just the place ! The pictures will be available very soon…